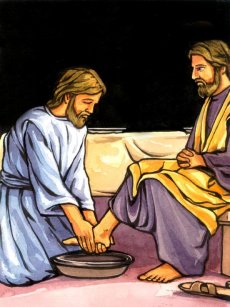 According to the Bible, on the night before his death Jesus had a final meal with his friends. Before this festival meal for Passover, Jesus surprised his friends by washing the feet of every person, a task that was normally done by a servant. He wanted to show his followers that they should love one another in humble ways.

Later in the meal, which is known to Christians as 'The Last Supper', Jesus passed round bread and wine. He said the bread was his body broken for them and the wine was his blood shed for them. He was telling them that he was going to die and that when they share bread and wine they should remember him. Christians share bread and wine at their church services all year round, but it is even more special on Maundy Thursday. Jesus also told his friends that they should love one another. It was later on this night that Judas betrayed Jesus in the Garden of Gethsemane.

Before 1689 it was customary in England for the king or queen to wash the feet of the poor in Westminster Abbey every Maundy Thursday. They also gave them gifts of food and clothing. In Queen Victoria's time men received clothing, shoes and stockings and women 35 shillings.

Today rather than wash feet or give clothing our Queen gives out specially made Maundy money in white and red leather purses. The white purse contains silver Maundy coins matching the Queen's age in pence, 95p, while the red purse contains ordinary money. In 2021 this is given to 95 male and 95 female pensioners, because she is 95 years old this year. The service takes place at a different cathedral or abbey each year and people are chosen to receive the money because of good work they have done in their community.