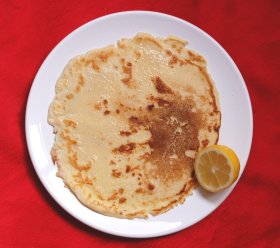 The long build up to Easter is called Lent. The day before Lent begins is called Shrove Tuesday. 'Shrove' means being forgiven for wrong-doings. It happens on a different date each year depending on when Easter is. This year Shrove Tuesday was on 25 February, 2020.

Another name for Shrove Tuesday is Pancake Day. Long ago this was a day for feasting and having a good time. People went to church to confess the bad things they had done and would be 'shriven' or forgiven before the start of Lent. As rich foods such as eggs were forbidden during Lent, one way of using them up would be to make pancakes.

Many people make pancakes on Shrove Tuesday and in some parts of the UK run in pancake races. This custom grew up because of a legend dating from 1445. On Shrove Tuesday one woman was still making pancakes as the church bells rang. Rather than be late she took her frying pan and pancake with her.

One of the most famous pancake races is held in Olney, Buckinghamshire where women over 18 years of age, wearing a skirt, apron and head covering, have been competing for hundreds of years. They have to toss their pancake on the start line and again at the finish to prove they haven't lost it.

In France and the United States Pancake day is called Mardi Gras which means 'Fat' or 'Grease Tuesday'.

Continue reading about the Easter festival timeline by finding out more about Lent.